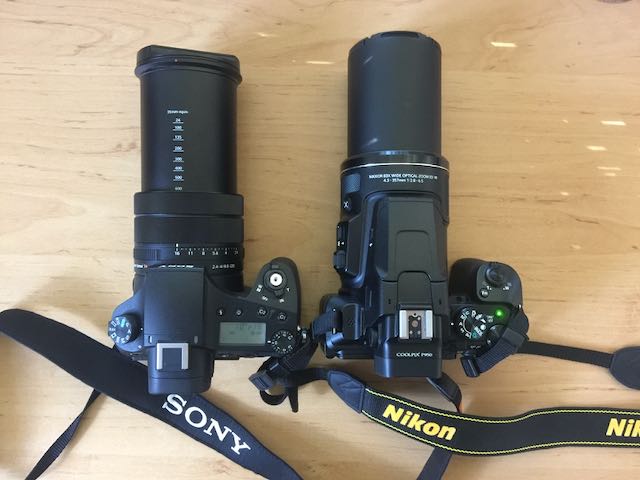 I recently received a Nikon P950 for review from the local agent. My aim was to take it out to the local bird hotspots along with the Sony RX10IV and give it a go. As the review take a while I am posting my review notes here until the full article is complete.
A full review of the Sony RX10IV can be found here I will update it
The P950 performed fantastically well overall
At the price point, it is in a different league to the Sony RX10 - much cheaper that is
The sony was better at low light with close subjects due to the larger chip size, this advantage seems to be reduced at further distances. The actual distance the Nikon gave you insured better focus, better light measuring and all-round just worked better at low light at a distance.
The extra zoom of the Nikon provides a clear advantage if you don't want to do too much post-processing
The focus mechanism on the Nikon P950 seems to distinguish better in crowded frames between the leaves and other objects where the sony RX10IV seem to be better at speed with a clear background. I was able to quickly catch a bird in flight with the Sony but the Sony was quite slow.
The Sony has a much more durable body and feels more like a professional camera. It provides very nice pro features like the manual Aperture and zoom wheels(although they do seem to be vulnerable to getting dirt in them), programmable buttons, a top screen. The Nikon uses the back wheel system for aperture which is not great and suite a few of the functions are hidden in the menu. Definitely more focussed at the amateur.
The Nikon P950 features a 1/2.3-inch sensor and has a format factor (sometimes also referred to as "crop factor") of 5.6.
RX10 IV there's a one-inch sensor, and to bring that into terms of 35mm, it's a 2.7x crop factor
Theoretically, the low light photography should be much better with the Sony, as mentioned above the extra optical zoom has some advantages.

I have posted the article on the Nikon P950 here

Please register and join the conversation about conservation.
Attachments:

Both are nice and hope you enjoy a lot your photography.

The Nikon P950 and Sony RX 10 IV articles have been posted
Nikon P950
Sony RX10 IV
Welcome to Conservation Mag, I am your host please PM or contact me in the contact us section with any questions regarding the forum.