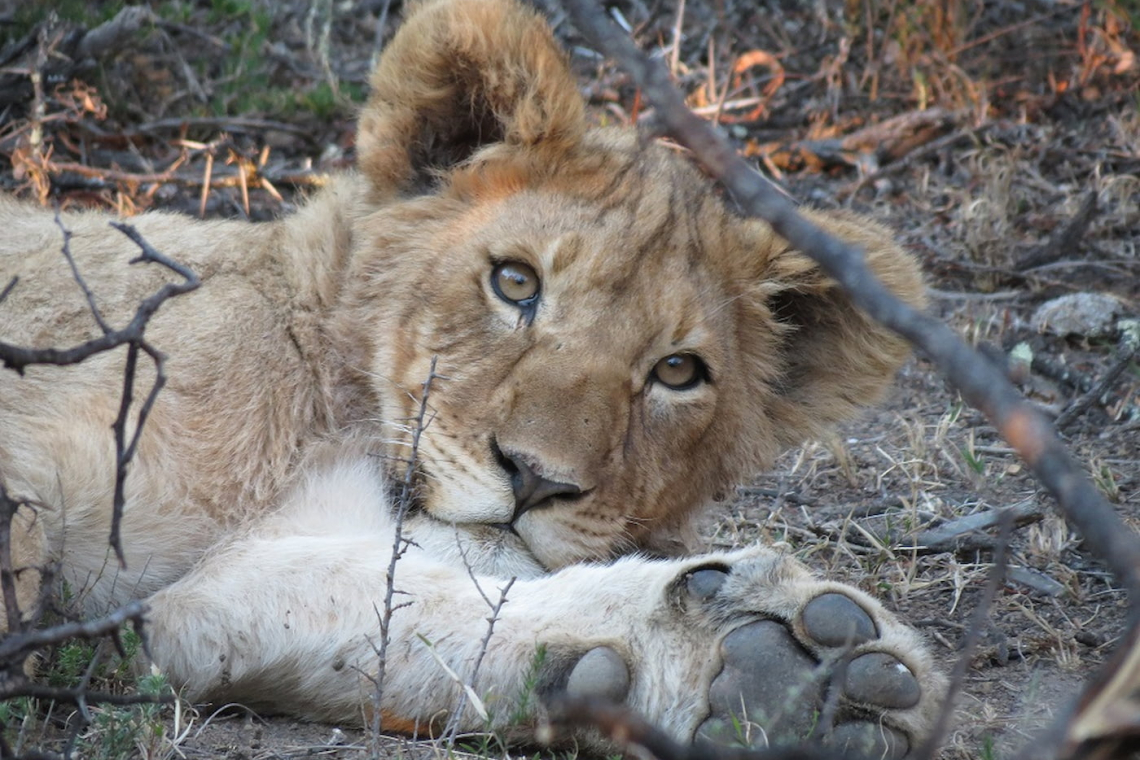 It’s strange how much faith a daintily electrified perimeter brings when you’re outside, miles from anyone, in the middle of lion country. I found myself pondering this in the dark, while taking a soak in a cliff-perched hot-tub in the Eastern Cape.

There were two reasons for this visit to Mount Camdeboo, a private game reserve some 60km south-east of Graaff-Reinet. The first was an invitation to experience its new luxury accommodation “pod” – a luxuriously prefabricated container perched on a secluded mountain-tops that was my temporary lodging. The second was related to the subject of this story: to see how England-born cheetah into the African wilderness were faring.

The cats - four-year-old brothers Nairo and Saba - were donated to Mount Camdeboo by animal conservation charity, The Aspinall Foundation. They travelled far more than I had to get here. By air and road, they’d gone over 13 000km to get to South Africa last February from a wildlife park in England. Their fame as “the first cheetah born in Britain to return to their African roots”, made headlines across international borders and for all involved. 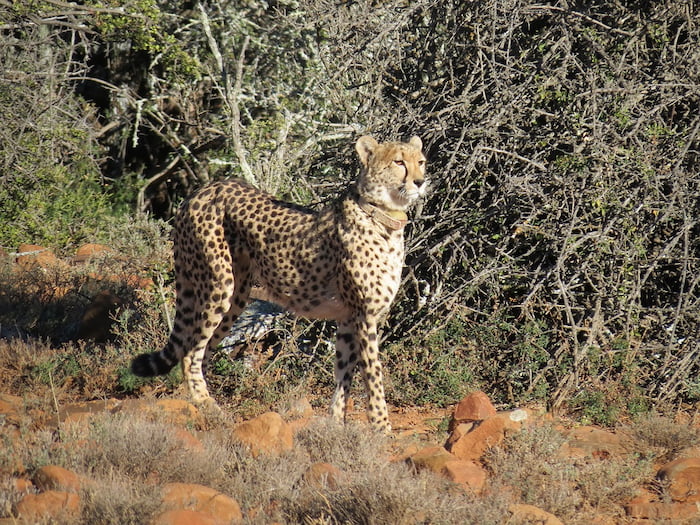 Mount Camdeboo covers 14 000ha of wilderness mostly comprising mountainous terrain while incorporating a few historic buildings and the new pods used to host visitors. The landscape is characterised by deep valleys and plains on elevated plateaus. Part of the Great Karoo, its climate is arid although diverse thanks to the diverse topography. The property lies within the Sneeuberg mountain range with the highest peak in the reserve rising to 2 600m above sea level.

This environment is vastly different to the home where the brothers were reared. They were born at Port Lympne in Kent and spent the first 36 months of their lives within the confines of the 36ha Howletts Wild Animal Park. Both Port Lympne and Howletts are under the aegis of the Aspinall Foundation.

Their new location in the Eastern Cape, however, is not incongruous with the species. Cheetah along with many other species were once plentiful in the region before being crowded out by human occupation. 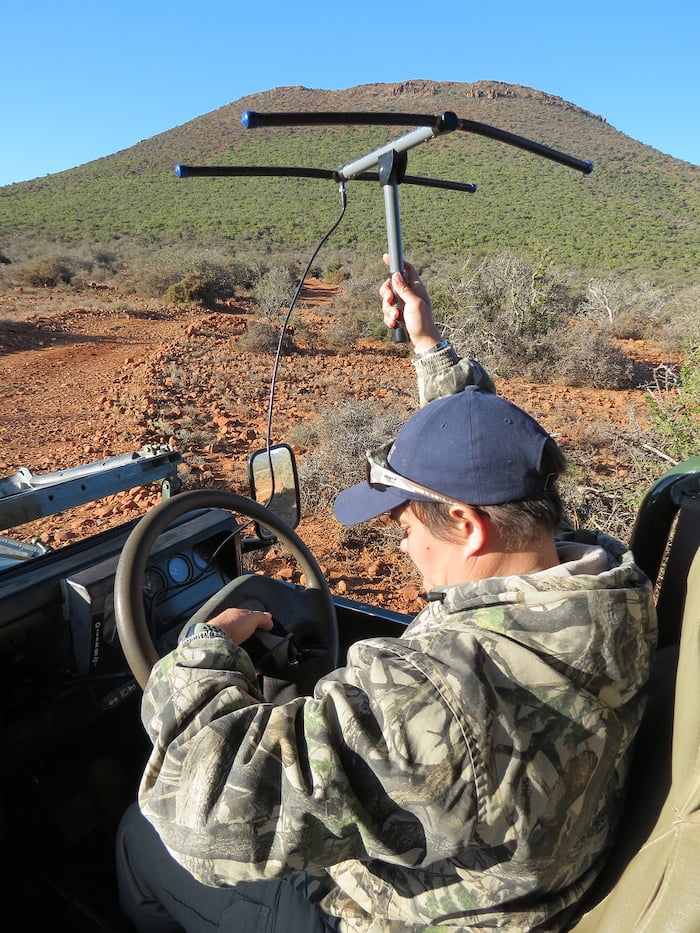 Tish Kleinschmidt and the team at Mount Camdeboo keep the cats collared as part of the monitoring project.

Among the indications to those days include the name of the only thoroughfare into the valley, named after the hamlet of Petersburg that once existed at its cul-de-sac.

Driving me around the reserve, head guide Laetitia “Tish” Kleinschmidt points out many that are back – including the Big Five - thanks to efforts of the current landowners.

In an attempt to reverse the shrinking of natural habitat, cheetah were introduced to Mount Camdeboo in 2007. It was another step that was first embarked on by the late Logie Buchanan and his wife, Cathy, and now, son Iain, since acquiring the land in 1996. 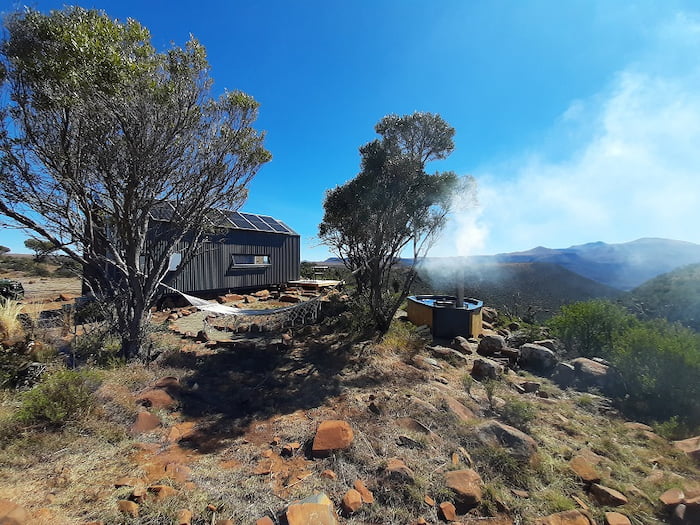 The new pods are offered as an add-on to guests staying at Mount Camdeboo.

Mount Camdeboo’s first cheetah to be released, Thandeka, was relocated from an Eastern Cape reserve as a part of the Endangered Wildlife Trust’s (EWT) Cheetah Metapopulation Project. She died in 2018 but had produced offspring that introduced her genetics into new areas.

The latest additions once again introduce new and much-needed genetic diversity to the region. According to Mount Camdeboo, fewer than 7 000 remain in the world and just 1 000 exist in the wild. Most are in South Africa’s two largest game reserves, the Kruger and Kgalagadi National Parks. The remaining 350 are spread between 50 smaller game reserves and it is these animals that are most at risk.

In the wild, most cheetah cubs die in their first three months. Half of fatalities arise from immune systems compromised by in-breeding.

In addition to the Aspinall Foundation, Ashia Cheetah Conservation NPC in South Africa is also associated with the cheetah at Mount Camdeboo. Ashia tests and treats captive-born cheetah for disease and malnutrition and maps their DNA. 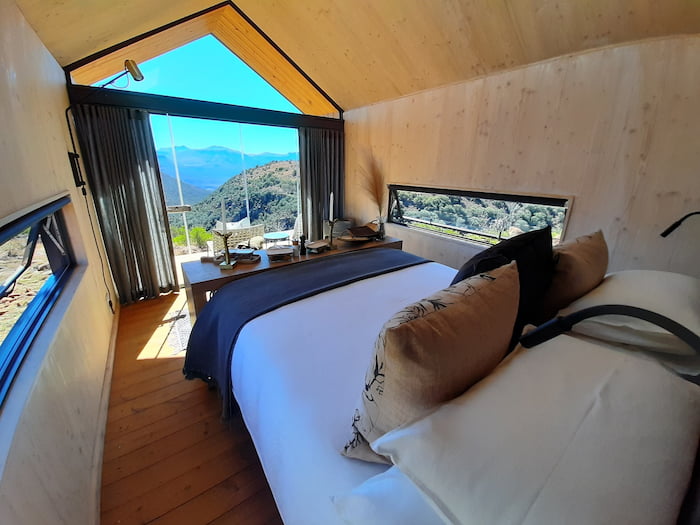 Pod-dwellers might have to make their own meals, but the view is worth it.

Upon arrival at Mount Camdeboo, Nairo and Saba were released into a 300ha “rewilding camp” stocked with small antelope. It was there that the pair accomplished their first kill, an encouraging sign considering their habituated upbringing. They have subsequently been moved to a fenced wilderness of some 8 000ha that remains closed to visitors.

The area is also home to Ava, an older female that is a year further into the wilding process. It is hoped that their interaction will extend the genetic lines.

Main image caption: 'Mount Camdebo has a pride of nine lions, which is also monitored for research purposes.' 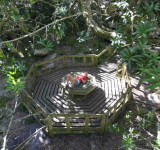 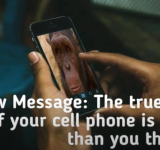 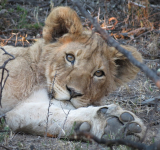