Saiwa Swamp Kenya: a Sanctuary for the Sitatunga 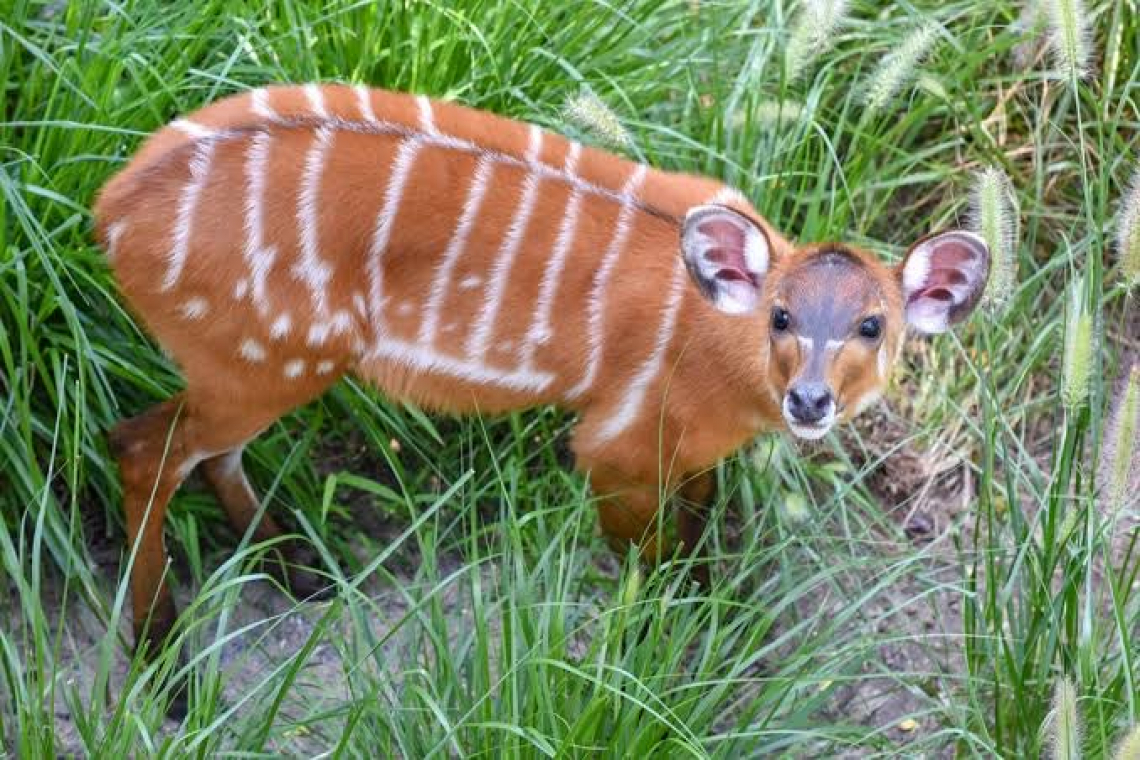 As the chilly, early morning mist cleared, we sat in silence, patiently waiting and watching. The drone of insects heralded dawn’s awakening as we kept an eye on the paths and tunnels made through the reeds and rushes by the Sitatunga. A rustle in the reeds and a faint calling sneeze alerted us that they were on the move. Excited that our patience had eventually paid off, all binoculars were trained on the very shy antelope that are so difficult to observe.

In the tropical wetland and surrounding riverine forest, Saiwa Swamp National Park was created especially for the protection of the habitat which provides shelter for the rare and vulnerable semi-aquatic Sitatunga antelope and is also a preserve for the endemic De Brazza monkey.

Saiwa Swamp is the smallest of Kenya’s national parks. Although only 3 sq. km its ecological diversity more than makes up for its very small size. It is situated near Kitale, an agricultural town in the Rift Valley province, 385 km North-West of Nairobi and almost on the Uganda border. 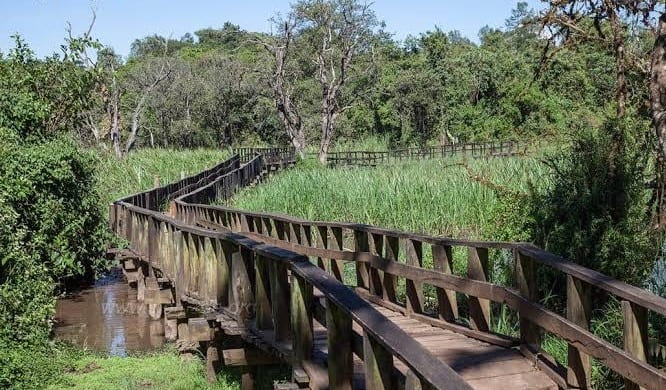 Dominated by bulrushes and other aquatic plants the swamp is fed by the Saiwa River which winds its way through the wetland and by the runoff from the surrounding riverine forest. Rarely visited and well off the tourist track this compact park is unique in that it only accessible by foot. There are no roads within the park but 18km of walking trails and bridges that meander around the park. The simple to follow walks take you across the bouncing timber boardwalks, over the swamp and down jungle and forest paths. Keep an eye on the rippling waters under the boardwalks and in between the bulrushes and reeds as you may get to see the Sitatunga peeking at you.

A stroll through the dense, riverine forest with sunrays bursting through the leafy canopy, leads to the four strategically placed observation towers. The trails and boardwalks help you safely explore the entire park and they expose the beautiful marshland and wildlife living within it. The elevated platforms give views over the thick and green forested wetlands and with some patience some interesting sightings can be made. 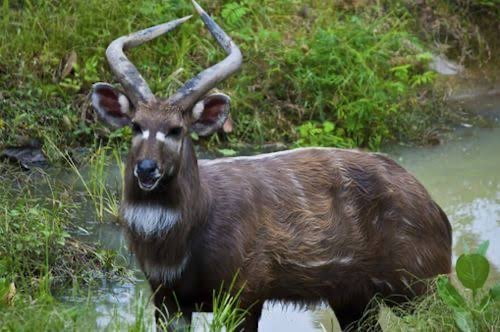 These, minimally researched antelope,  also known as marsh buck, are swamp-dwelling antelope native to Africa and the only species of antelope known to be aquatic. The Sitatunga (pronounced “statunga) is a long-legged bovine with strange splayed and elongated hooves that have an average height of 1.5 meters. They look as if they are always hunched over but this is because their rear legs are much longer than their front legs. This strange placement helps with stability in the soft, marshy areas. Interesting too is that the pasterns, which is the part of the leg above the hoof, are flexible, this unusual leg construction makes it easier for them to run on damp surfaces. The Sitatunga have ingeniously adapted themselves so as to be able to exploit the abundant food resources of the swamp habitat and so with the rich, year-round food supply, their home ranges are small. While feeding they communicate with very low squeaking noises.

The females have a reddish-brown coat while the males are dark brown and have a mane and horns. White patches can be seen on the face and throat with several stripes and spots all over the body. The remarkably twisted horns can reach a meter or more in length. They can live up to about 20 years and their predators are lion, leopard, large pythons and of course, humans.

Sitatunga are unique in that they like to live in swampy areas with thick grass and reed beds. They make trails through swamps that lead to clusters of reeds where they can sleep. Their coat is oily and water repellent and with the elongated and splayed hooves they can walk on submerged vegetation and outrun danger in the swamps. Moving slowly to avoid detection the Situtunga gently enters the water and drops down until nearly all of its body is submerged. They are good swimmers and their escape when in danger, is underwater.  Young Situtunga are born in the dry season and are concealed by their mothers among the reed platforms of the swamp. They are extremely shy and prefer to feed early morning and evening and spend most of the day submerged or resting in the reedy shade. Their lifestyle is basically sedentary although occasionally the do leave the swamp after dark to browse. Habitat and wetland loss is the greatest threat to Situtunga as well as changing water levels as this has a direct effect on their diet.

There are thought to be about 170,000 Sitatunga worldwide and 40% of these are in protected areas. With their preferred habitat of wetlands and marshy areas, small groups can be found in scattered locations throughout western, central and a few places in East Africa. Isolated groups are also found in the swamps of Angola, Botswana, Zambia and Zimbabwe. Although rarely seen due to their elusive behaviour, the layout and landscape of Saiwa Swamp make it easier to observe them. 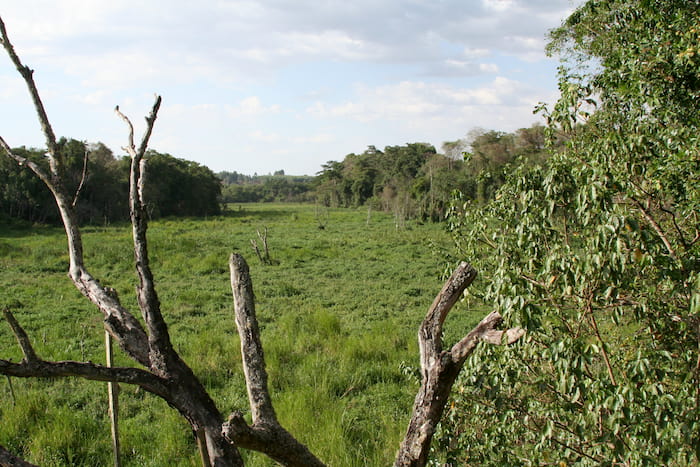 The Situtunga (Tragelaphus spekii) is named after the Englishman, John Hanning Speke, who discovered the source of the Nile at Lake Victoria in 1858. The species was first observed by him in 1863 and he called them “nzohe” which is still the Swahili name for the animal.

Saiwa Swamp National park consists of three distinct areas: wetland of reeds, bulrushes, sedge and tall swamp grasses, wooded grassland and bordering the swamp a tropical forest area of wild fig trees, yellow acacias and swamp palms amongst many others. Within the dense grass beds and rushes, 24 of Kenya’s exquisite terrestrial orchids can be found. The forest provides a unique and important habitat for birds, insects and mammals. Ambling through the shaded landscape in this tropical wetland and assortment of the riverine forest is a delightful experience. 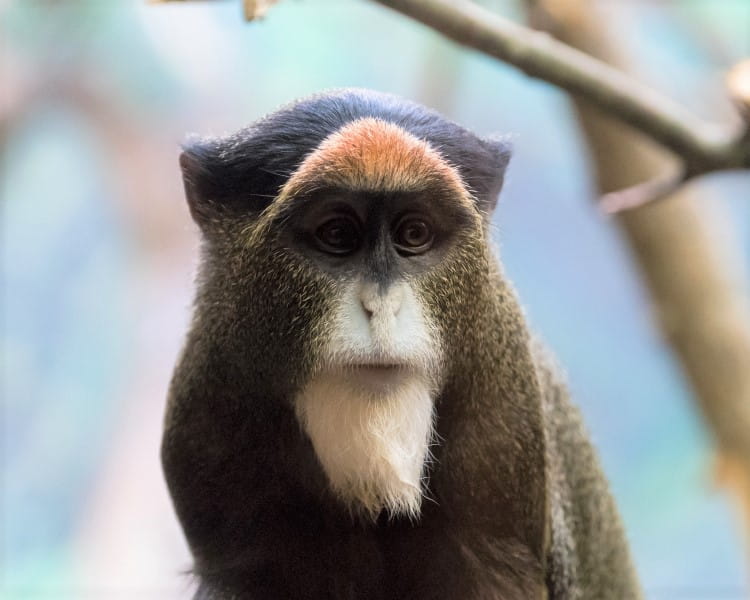 With such varied vegetation Saiwa Swamp, birding is top notch, not only because of so many interesting species but also for the numbers of birds that flock to the floodplains during the migratory season. There are over 372 species including the splendid black and white casqued hornbill, Ross’s turaco and the eastern grey plantain eater while the spectacular Narina’s trogon and collard orange tufted sunbird are sheltered within the forest. The marsh birds are plentiful with the most conspicuous being the grey-crowned cranes, black African duck and the grey heron. The presence of the grey-crowned crane is a good gauge as to the stability of the wetland ecosystem. Watchtowers around the park make for excellent bird watching points.

It is also home to the endangered De Brazza monkey. This distinctive monkey, with its white beard, is both a strong swimmer and a good climber and forages in family troops in the early morning and late afternoons. Fluffy black and white Colobus monkeys are bountiful in the wooded areas of the swamp as are the vervet and Sykes (or blue) monkeys. 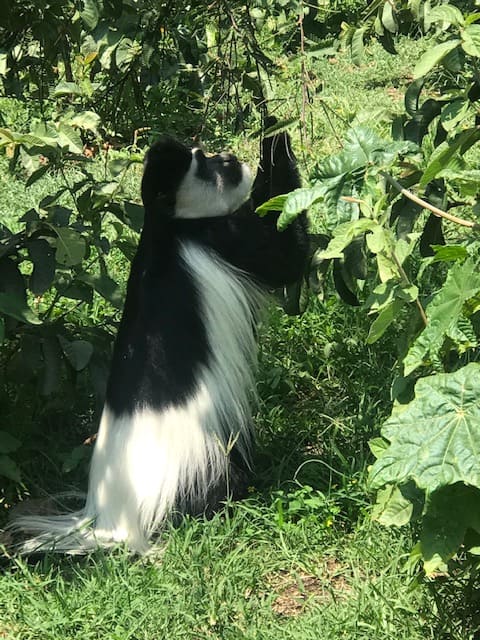 The swamp is home to a number of cats, including leopard, but most are difficult to spot. The African civet and the common genet can sometimes be caught in the beam of a spotlight around the swamp at night.

Both the Spotted –necked otter and the Cape-clawless otter live happily around the swamp while the lessor bushbaby and giant squirrel have an ideal habitat in the forest trees.

With its dense canopy and rich earthy smell the forest hums with life. Swamp insects, dragonflies, butterflies, toads, frogs, lizards and snakes are numerous and add to the fun of exploring the dense undergrowth, slimy ponds and the windy paths of this peaceful ecosystem.

A brief history of the park

Once part of a larger area of forest, swamps and freshwater marshes Saiwa swamp was originally located on a colonial-era farm. After independence, many settlers sold their farms and Timothy Barnley realised that if the swamp was not protected then the risk of extinction of the Sitatunga was a very real possibility. Many farmers donated some land around the swamp. It was originally designated as a bird sanctuary in 1972 as the swamp area was recognised as an important breeding and roosting area for the grey-crowned crane. In 1974 the park was gazetted as a national park for the protection of the endangered Situtunga antelope, the De Brazza monkey and other wildlife species. 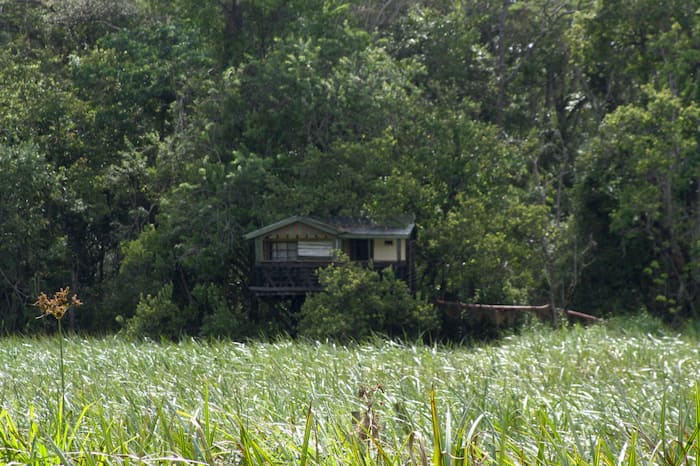 The park is open year-round and friendly Kenya Wildlife Service (KWS) rangers offer guidance on routes and wildlife viewing. They are knowledgeable and can be officially hired as safari guides for a small fee.

Saiwa Swamp National Park is a perfect example of how a small area can survive as a complete ecological entity. The secluded tranquillity of this remote park with its elusive Sitatunga is alluring and is a peaceful haven for nature lovers. Do consider making a detour to visit the smallest national park in Kenya as it is very worthwhile and endlessly rewarding.