Anglers and Scientists Fight to Save the Dusky Kob 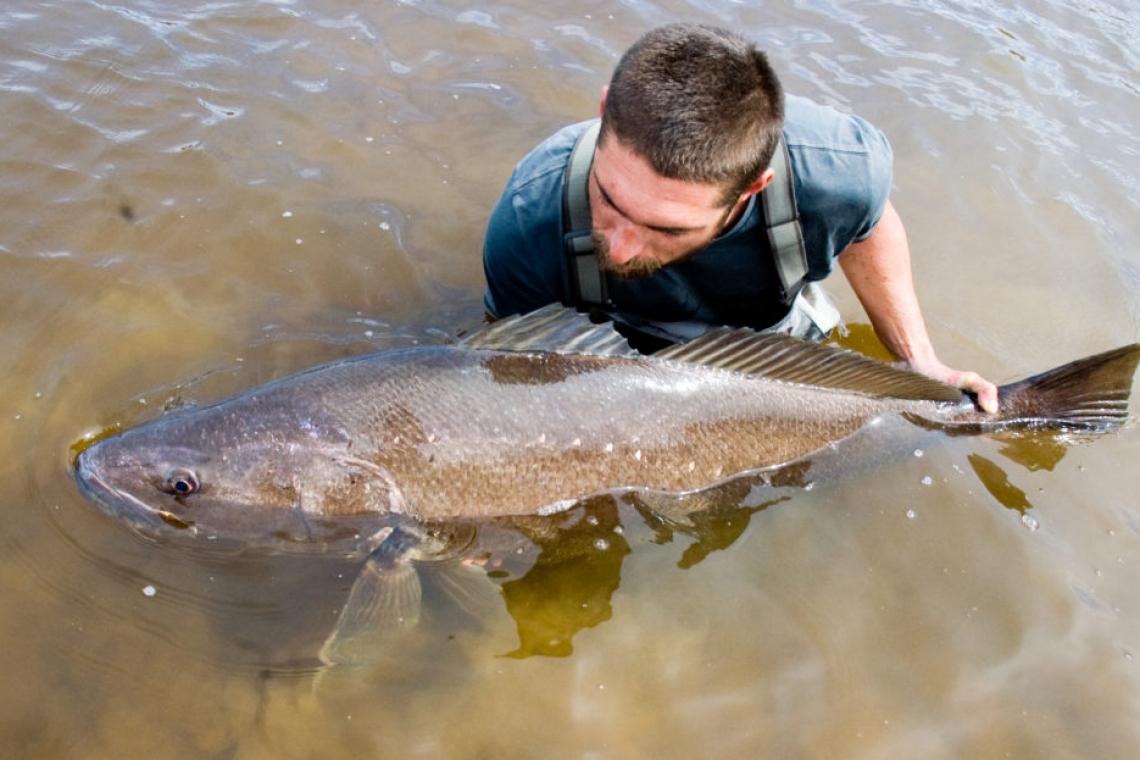 Overfishing has caused a decline in the number of dusky kob along the South African coast. Timely interventions will no doubt ensure the survival of the Dusky Kob; otherwise, the risk of extinction is quite palpable.

A few generations ago, South Africa’s Dusky Kob, (Argyrosomus japonicus) was highly abundant and often caught while fishing. However, now to catch a dusky kob seems to be a rarity for estuary anglers. Overfishing has caused a decline in the number of species along the African Coast. Dusky kob is silvery to bronze-green coloured fish, a member of the family Sciaenidae, and may grow up to 2 m (6 ft 7 in) in length. It is quite a prized catch for many recreational fishers. It is one of the most popular fish in South Africa.

The Dusky Kob is an estuarine-dependent fish. It lives for 30+ years, and the oldest recorded was at 42 years. It takes 5-7 years for them to reach maturity and a 90 cm length. They can grow up to 2m and reach a weight of 70 kg. Juvenile Dusky Kobs live in their home estuary while the adult dusky kobs live mostly at sea, visiting estuaries for short periods. Unfortunately, very few of these fish are able to reach the sea.

The dusky kob is essentially a slow-growing species. They need time to grow and reproduce effectively. Now due to the over-fishing and over-exploitation of the juvenile dusky kob, this icon for fishing is at risk of becoming extinct. There have been various intensive acoustic tagging studies over the past several years, and they are signalling a collapse of the species.

The life cycle of A.japonicus can be divided into four phases:

(i) eggs and larvae, which occur pelagically in the nearshore marine environment;

(ii) early juveniles, which are found in the upper reaches of estuaries;

(iii) juveniles, which inhabit the upper to lower reaches of estuaries and the surf zone;

(iv) adults, which occur predominantly in the nearshore marine environment, but frequent estuaries and the surf zone.

The last three phases are particularly vulnerable to the activities of man.

The Plight of the Dusky Kob

“The story of the dusky kob is actually quite sad,” explains Dr JD Filmalter who has been studying the movement patterns of the species using acoustic tracking technology for the past four years.

It has been ascertained that populations are highly localized and resident. Essentially, every single dusky kob that is caught and kept is severely negatively affecting the future of the entire species in Africa.

“The species occurs along our entire east coast, and just a few generations back, it was highly abundant. Today catching a size dusky kob is a rarity for most rock-and-surf, and estuary anglers,” Filmalter says, explaining that more than 20 years ago a population estimate based on catch statistics and biological traits put the number of breeding adults at less than 5% of their historic un-fished levels.

“They migrate far less than previously thought,” Filmalter states, outlining how juvenile dusky kob lives in their home estuary for the first three to five years of their life and rarely leave. “Coastal movements of adults are also highly limited,” he says. 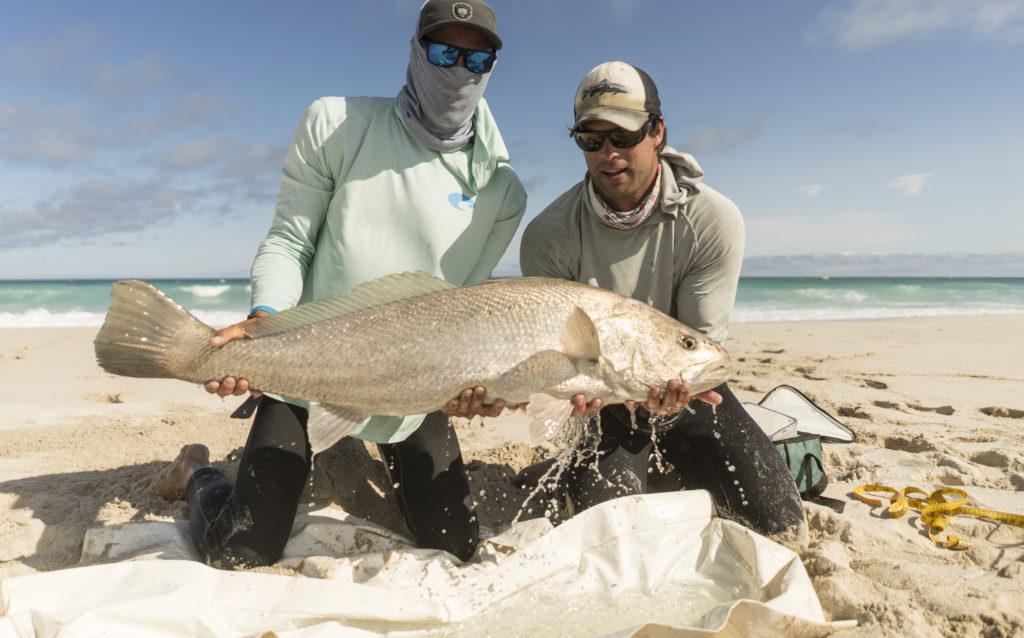 Graeme Forrer with a beautiful reward after many miles of walking. Photo: Steve Benjamin/Animal Ocean

What this means is that every single dusky kob that is caught and kept is severely negatively affecting the future of this fish.

“The dusky kob’s survival hinges on what happens in and around our estuaries. This is where the biggest source of the problem lies,” Filmalter explains, highlighting how the tracking data is showing is that this species could be managed at a more local level than a ‘one size fits all’ approach for almost all of its distribution.

“Provincial, municipal or even estuary specific regulations, could go a long way to helping rebuild local populations and the stock at large. But the success of any new regulations would require vast improvements in enforcement and compliance across all fishing sectors.” 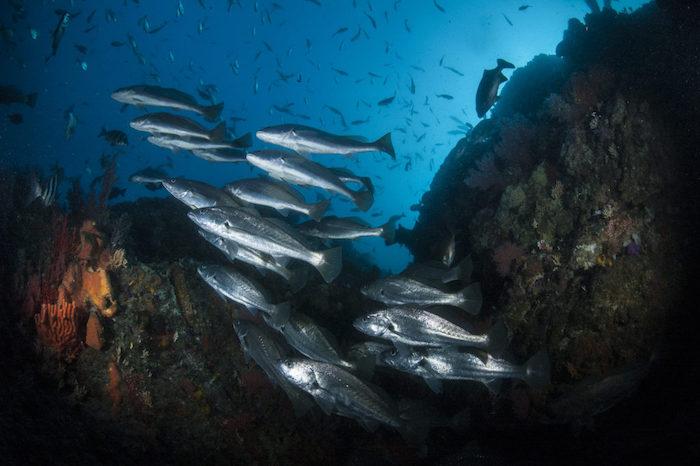 Declining Population of Dusky Kob due to over-fishing

Over the past two decades, Dr Paul Cowley and his students at the South African Institute for Aquatic Biodiversity (SAIAB) have spearheaded fish tracking research within South Africa. They began by following a single dusky kob around a small Eastern Cape estuary. Eventually, the research has evolved and led to the development of a nationwide monitoring program called the Acoustic Tracking Array Platform (ATAP) with a network of over 100 automated acoustic listening stations deployed at sea and in estuaries from the Berg Estuary to Ponta do Ouro in Mozambique.

Presently, over a thousand fishes, sharks and rays, tagged with acoustic transmitters, are being tracked continuously by the ATAP network. Many researchers have climbed on board to focus on one specific coastal area or a single species.  For Paul and his team, however, the dusky kob has always held a particular focus. The findings have been astonishing: almost 90% of the tagged juvenile fish have been caught and are no longer with us. This means that 90% of the fish which had not even reached maturity yet and were unable to breed, were caught before they could do so. This is a staggering mortality rate and is most definitely the leading cause of the severe population decline. Juveniles are struggling to join the adult population, while the long-lived adult stock is slowly being eroded.

“Provincial, municipal or even estuary specific regulations, could go a long way to helping rebuild local populations and the stock at large. But the success of any new regulations would require vast improvements in enforcement and compliance across all fishing sectors.” JD Filmalter

How can we Preserve the Dusky Kob Species?

Regulations and compliances must be put in place to prevent over-fishing. Timely interventions will no doubt ensure the survival of the dusky kob; otherwise, the risk of extinction is quite palpable. Establishing estuarine protected areas as a fisheries management objective to assist with the rebuilding of depleted fish stocks such as dusky kob is a step in the right direction. This would prevent over-fishing and over-exploitation of the dusky kob. In addition, the culture of catch-and-release in which a fish is caught and then let go should be promoted for recreational anglers. Also, we need a holistic approach to address and preserve the species within all four phases of its life cycle to ensure the effective maturation and reproduction of the species. The outlook looks dire for the dusky kob unless some new policies and practices are not adopted.

Ruby KhanEnvironmentalist / Freelance Writer
Ruby is a freelance writer for ConservationMag. She has a passion for the environment, conservation and raising awareness for climate change issues. Ruby holds a masters in environmental science.