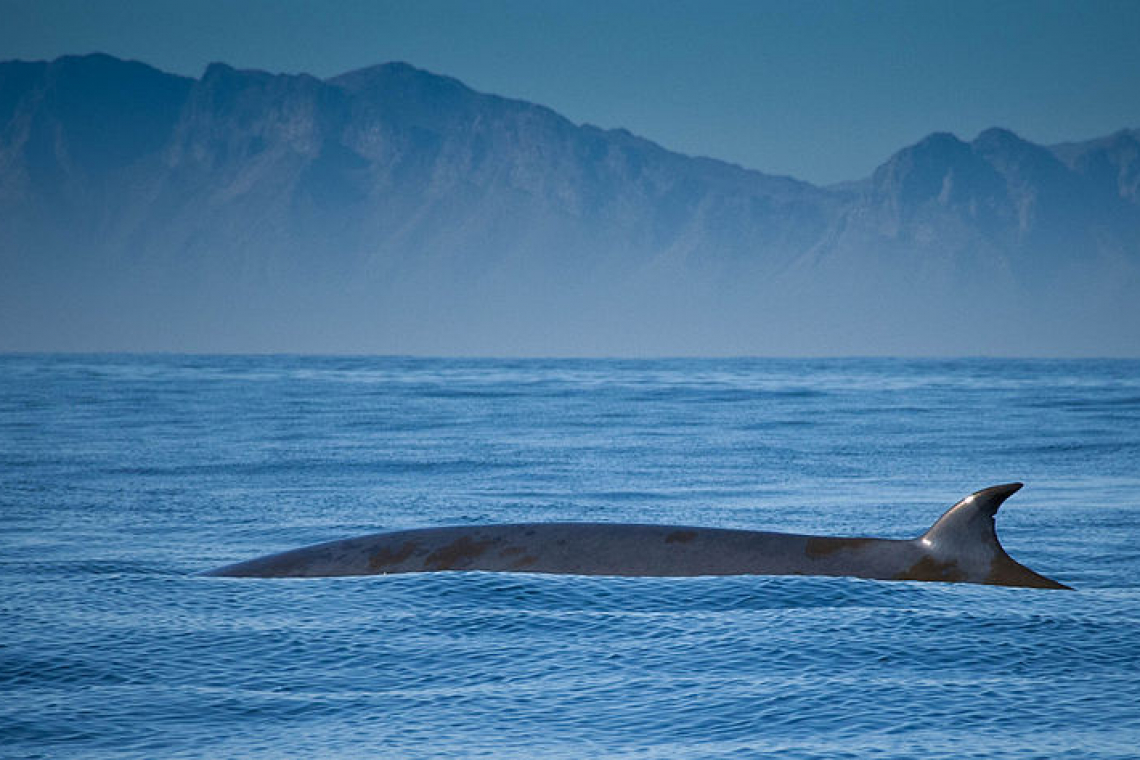 The Bryde's whale (Balaenoptera edeni) belongs to the baleen family of whales, together with blue whales and humpback whales. Bryde’s whales are commonly confused with Sei Whales, however,  Bryde’s whales are smaller and inhabit predominantly tropical and sub-tropical waters above 16° Celcius. Bryde’s whales are a smoky grey colour and their head is one quarter of their entire body size. They are often identified by their slender dorsal fin, which is deeply curved.

The Bryde’s whale is an understudied species and a lack of information regarding their population status, together with confusion over whether there are various sub-species or sub-populations, has led to a “data deficient” status under the IUCN Red List of Threatened species. They are also listed under Appendix II of the Convention on the Conservation of Migratory Species of Wild Animals. Although some populations of Bryde’s Whales remain only in one area, while others migrate.

The distribution of Bryde’s Whales spans across the tropics, including off the coast of Africa, Australia, around the Pacific Islands, China, in the Gulf of Mexico and off the coast of Peru and Brazil. Their main diet consists of fish, krill, red crabs, shrimp, and they particularly prey on fish that live in schools, such as sardines, mackerels, anchovies, and herrings. They use a wide-open mouth and a lunging motion to catch their prey, usually together with a number of other species such as seals and dolphins. While populations of Bryde’s Whales are considered to be relatively in resilient, there are some populations of Bryde’s whales which are considered critically endangered, such as in the Gulf of Mexico. There are no confirmed natural predators of the Bryde’s whale, although many scientists consider that only killer whales would have the strength and size to prey on them. Current threats to Bryde’s whales include; entanglement in fishing nets, ship strikes, ocean noise, and impacts from oil and gas activities.  Bryde’s whale also continues to be hunted under Japans ‘Special Permit’ program.

In South Africa, a research project is focused on understanding more about the inshore population of Bryde’s whales that reside in South Africa. This population of Bryde’s whales is the smallest population size of any large whale occurring in South African waters. The scientists hope to learn more about the genetics of the population, as well as their feeding and foraging ecology. These inshore Bryde’s whales are considered to be extremely vulnerable to the effects of overfishing and environmental change as they rely heavily on sardines and anchovy populations for their survival. It is unclear to what extent they follow the movement of the sardines and anchovies along the east and west coast during autumn and winter. Knowledge obtained through this research project, on their population structure and movements, will help to inform conservation management of the species in South Africa. 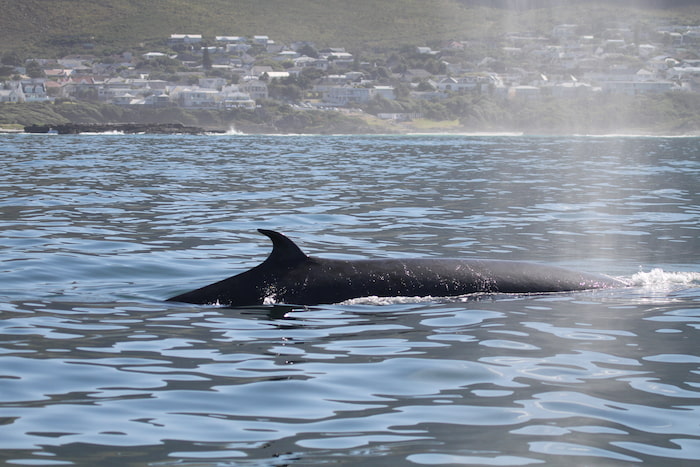 The Mammal Research Institute Whale Unit is currently conducting boat-based field research on Bryde’s whales in Walkerbay, under permit conditions of the South African government. This entails boat approaches to Bryde’s whales with the purpose to obtain photographs for subsequent individual identification (through the marks in the dorsal fins) as well as skin biopsy samples for subsequent genetic analysis.

At an estimated 600 individuals, the inshore population of Bryde’s whales has the smallest population size of any large whale species occurring in South African waters, with its current international conservation status is listed as “Data Deficient” and nationally as “Vulnerable” under the IUCN criteria. 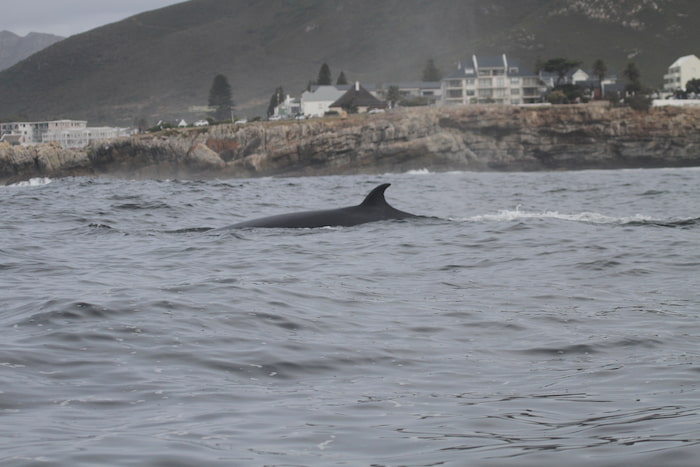 The two research projects on this species specified below:

Conservation genetics:
The South African inshore Bryde’s whales do not make extensive North-South migrations as other baleen whale species (such as the southern right whale), but is known to exhibit a year-round residency in South African coastal waters, the only baleen whale species identified as such. As they need to forage frequently to meet their daily energetic needs, they are subject to following their seasonally moving prey. Therefore, they have a seasonal movement coinciding with the seasonal movement of their main prey species (sardines and anchovies), with a northward movement along the east and west coast during autumn and winter, and a return to the central Agulhas bank during spring. However, it is not fully understood if the movement of inshore Bryde’s whales is geographically restricted to either the west or east coast, or if they all form one random mating and moving population. Nonetheless, knowledge on possible population structure has strong implications in the conservation management of the species. In order to address this question, we aim to obtain skin biopsy samples of Bryde’s whales for subsequent genetic analysis. Additionally, Bryde’s whales will be photo-identified through the marks on their dorsal fins at various sites along the South African coast to find possible movement patterns of individual whales.

Foraging ecology:
Despite the basic knowledge on primary prey and seasonal movements, the feeding and trophic ecology of South Africa’s inshore Bryde’s whales remains understudied. Nonetheless, due to their year-round residency on the Agulhas Bank and dependency on economically important pelagic fish (mainly sardine and anchovy) for its primate food source, they are extremely vulnerable to the effects of overfishing and environmental change. Therefore, we aim to investigate the past and present dietary contributions to evaluate possible changes in foraging strategies and assess the effects of pelagic fish exploitation on the trophic level at which these whales feed. This will be done through the analysis of stable isotope profiles in the baleen plates of stranded animals, as well as from skin biopsy samples. Additionally, we will be flying drones to evaluate the temporal changes in body condition as a proxy of foraging success.