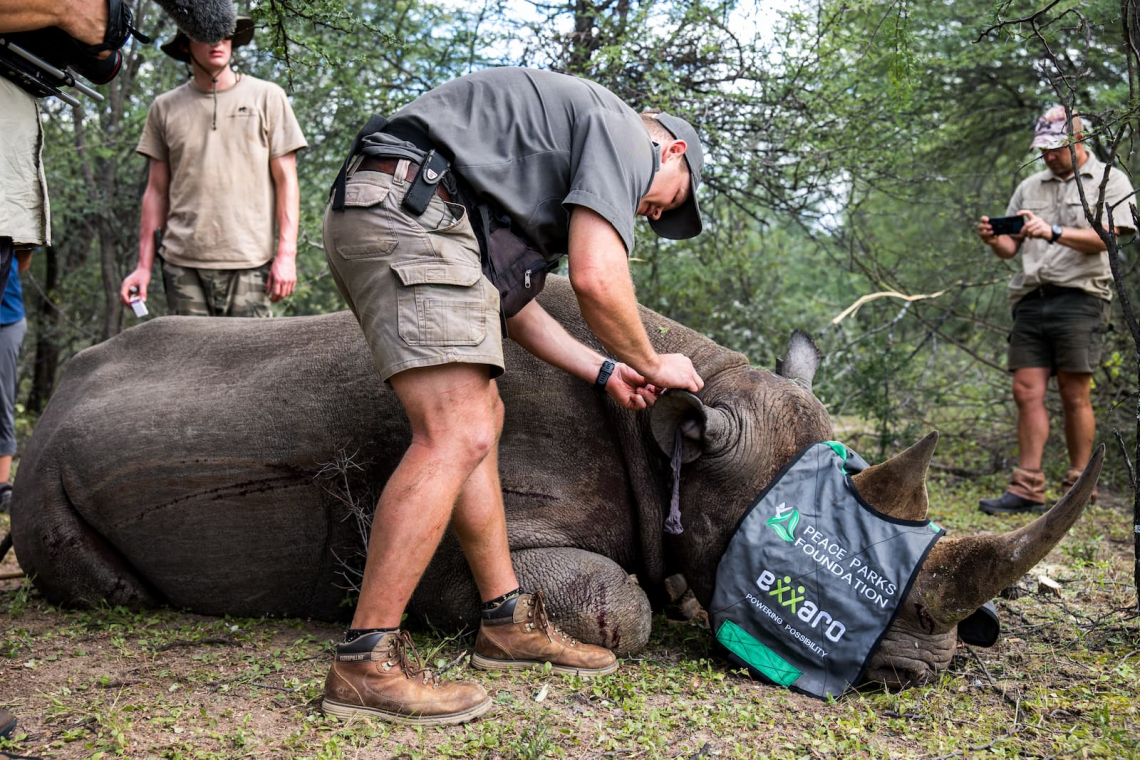 August/September marks a significant milestone for the rhino species' fight against rhino extinction and the rewilding of Zinave National Park with rhinos. Conservation heroes have successfully reintroduced 27 rhinos, 20 white and 7 black rhinos in Mozambique. This period also saw the arrival of the first rhino calf born in the park in over four decades.

In August, seven critically endangered black rhinos were safely translocated from Manketti Game Reserve in South Africa to Zinave National Park in Mozambique. This follows the successful reintroduction of 19 white rhinos to the park just two months earlier. The white rhinos have adjusted to their new home with ease, and, remarkably, a new calf was born into the herd soon after their arrival. The same is hoped for the newly arrived black rhino brought there as part of a pioneering conservation project committed to restoring, securing, and expanding populations of both species.

Return of the Rhino to Zinave National Park, Mozambique

The initiative is the result of a partnership between the mining and renewable energy solutions company - Exxaro Resources, Peace Parks Foundation and Mozambique’s National Administration for Conservation Areas (ANAC) in support of and collaboration with the Governments of Mozambique and South Africa. Working on a two- to three-year timeline, the project aims to relocate more than 40 rhinos to Mozambique in a series of highly coordinated and carefully managed rewilding operations. 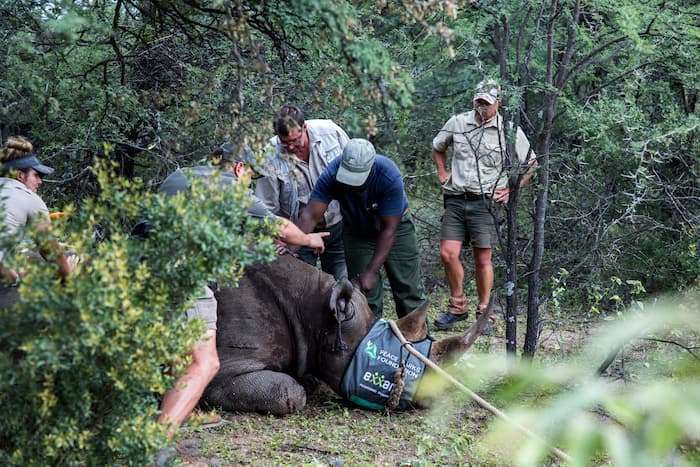 Capturing the rhino in Manketti

In 2002, the Governments of Mozambique, South Africa and Zimbabwe entered into a Treaty to establish the Great Limpopo Transfrontier Conservation Area, spanning over 100 000 km 2 and incorporating five national parks, including the iconic Kruger National Park. Now, 20 years later, it is fitting to celebrate two decades of continued rewilding and restoration of this globally important cross-border conservation landscape by introducing these keystone species.

Since 2016, through the long-term co-management agreement between ANAC and Peace Parks, an intensive rewilding programme has reintroduced more than 2 300 game animals representing 14 different species into Zinave National Park. This has included rewilding the park with buffalo, elephants and leopards. In September last year, the first lions were also recorded in Zinave after a 40-year absence. It is assumed that the lions are migrating from one of the other parks within the transfrontier conservation area: a good indicator that nature is returning to health and affirming yet again the vital role of connectivity between safe havens within a conservation landscape.

The rhinos were kindly donated by Exxaro Resources through its Manketti Game Reserve. Exxaro has played a significant role in the strategic planning, coordination and funding of this international conservation initiative. Dr Nombasa Tsengwa, CEO of Exxaro Resources, explained: “As part of Exxaro Resources’ ambitious project to relocate its populations of black and white rhinos, a partnership was formed with Peace Parks based on the Foundation’s proposal to establish a new founder population of rhino in Zinave National Park. This option complements Exxaro’s Biodiversity and Environmental Management strategies and meets our project criteria of moving our rhino to a safer location, whilst at the same time significantly contributing to broader rhino conservation strategies of the region.” 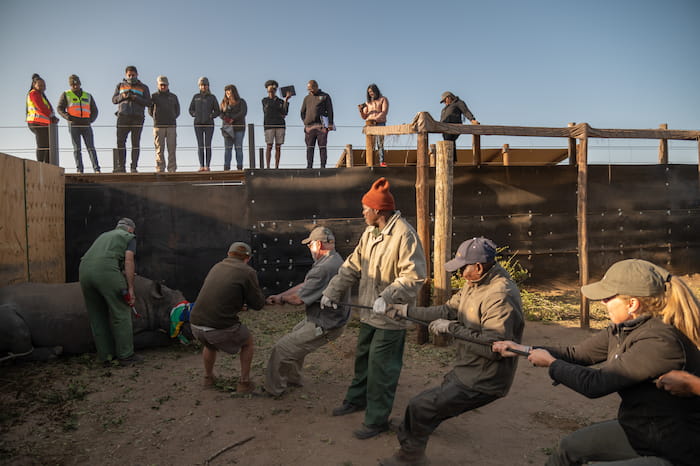 Beyond its extinction in Mozambique, the black rhino suffered a radical decline across its entire native range: between 1960 and present-day their numbers, scattered sparsely from Kenya down to South Africa, dropped by 98% to less than 6,000 individuals. The mammoth task of increasing numbers and rebuilding thriving populations was overwhelming at its worst - but this has served as a powerful motivation to persist in innovative conservation efforts, with active range expansion being one such approach.

To protect rhinos for future generations, their reintroduction to new suitable habitats, with the capacity to rebuild large viable breeding herds under strong security and strategic conservation management, is one of the many measures currently undertaken by Peace Parks – and Zinave makes a strong case as safe haven for new founder herds. It offers the expansive but secure range the species needs to thrive, with broadly rich rewards for its ecosystems in doing so. The introduction of rhinos is the pinnacle of an extensive rewilding programme that has seen more than 2 400 animals from 15 different species reintroduced by Peace Parks and ANAC, who jointly develop the park under a long-term co-management agreement entered in 2015. The focus of this partnership is to create a healthy ecosystem by introducing viable wildlife populations, attracting tourists back to the park and supporting the livelihoods of local communities living around the park.

African rhinos are ‘keystone species’ – their presence and role within an ecosystem have a disproportionate effect on the life of all kinds, from insects to antelope and elephants. These biological impacts differ crucially between the two species, combining restorative benefits which cannot be reproduced. Whilst white rhinos are helping to restore Zinave’s grasslands as they graze, black rhinos browse on very specific plants and process them uniquely, acting as a potent natural fertiliser and allowing the nutrients from vegetation to be cycled back into the earth with great efficiency. The benefits of this soil enrichment show through in the growth of more and more nutritious plants in these ecosystems. This same nutritional advantage, in turn, is passed on to particular species which share the rhino’s denser habitats and depend on flourishing vegetation to survive and thrive.

Werner Myburgh, Peace Parks CEO, said: “The arrival of a founder herd of black rhinos in Zinave marks an incredibly special achievement for Peace Parks and our partners. Having two African rhino species reinstated as the vital cornerstones of this complex ecosystem will make a crucial contribution both to the greater biodiversity and to the status of the park as a sought-after eco-tourism destination and the only “Big Five” national park in Mozambique. Zinave is one of five national parks in a 100,000 square kilometre transboundary landscape initiative spanning three countries. The development of the park is the surest way to generate direct economic benefits for the communities dependent on the very same ecosystem that supports these rhinos. Investing in people and their opportunities alongside wildlife is implicit in successful projects and partnerships across all the landscapes where we focus on achieving impact at scale.”

On the road to Zinave

Translocating black rhinos can pose greater challenges than with their square-jawed relatives, given their less tolerant, more aggressive nature, and keeping this precious cargo safe once they arrive in Zinave requires the same level of critical care. To ensure that they were in peak condition before embarking on their epic journey - the longest road transfer of black rhinos ever done - they were monitored in specially constructed bomas for several weeks. Once on the trucks, they were supervised by a team of veterinarians throughout, whilst armed forces never left the convoy’s side.

Again, they now find themselves in reinforced boma structures in Zinave, where they will be observed until the veterinary teams sign off on their release into the park’s rhino sanctuary. To maximise the safety of the rhinos, they have each been fitted with a state-of-the-art tracking sensor, enabling the live tracking of animals and assets in a central operations control room that is operational 24/7. The sensors form part of a suite of integrated security interventions to keep the rhino and the park’s other wildlife safe. Significant investment, also with additional funding support from the German Postcode Lottery and MAVA Foundation, has been channelled into further protection efforts that include the recruitment of 34 additional rangers who received specialist training on rhino protection, bringing the number of rangers deployed in the sanctuary and surrounding areas to 80. In addition, 20 sanctuary guards will be deployed for first-line detection of incursions. A helicopter and fixed-wing aircraft integrated into a rapid response unit with a canine team – were introduced to boost surveillance and counter-poaching reaction capabilities. 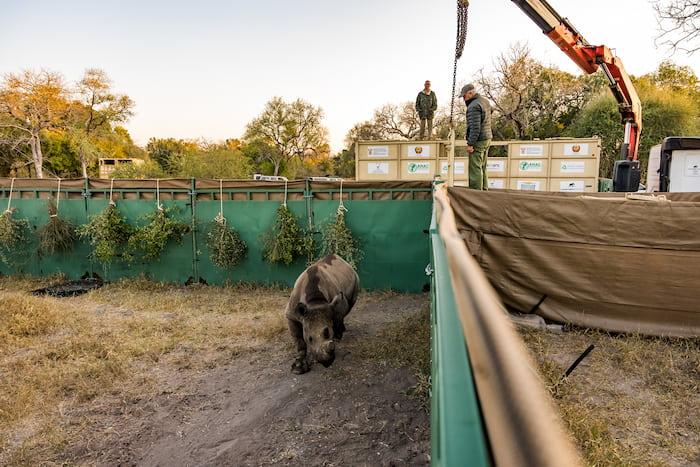 “We are proud to see Zinave National Park emerge as a flagship protected area in Mozambique through our partnership with Peace Parks Foundation. The arrival of the iconic black rhino back into the park for the first time in four decades marks yet another step towards realising the greater potential of the park and the opportunities it holds for growth in regional tourism, community upliftment and employment. If this is what can be achieved in one park in just seven years, we are excited about what the future holds for more transformative conservation achievements not only in Zinave but also in the other protected areas - Limpopo, Banhine and Maputo national parks being developed through this partnership,” said Celmira da Silva, the Director General of ANAC.