In New Zealand, Conservation Is Buoyed by Indigenous Knowledge 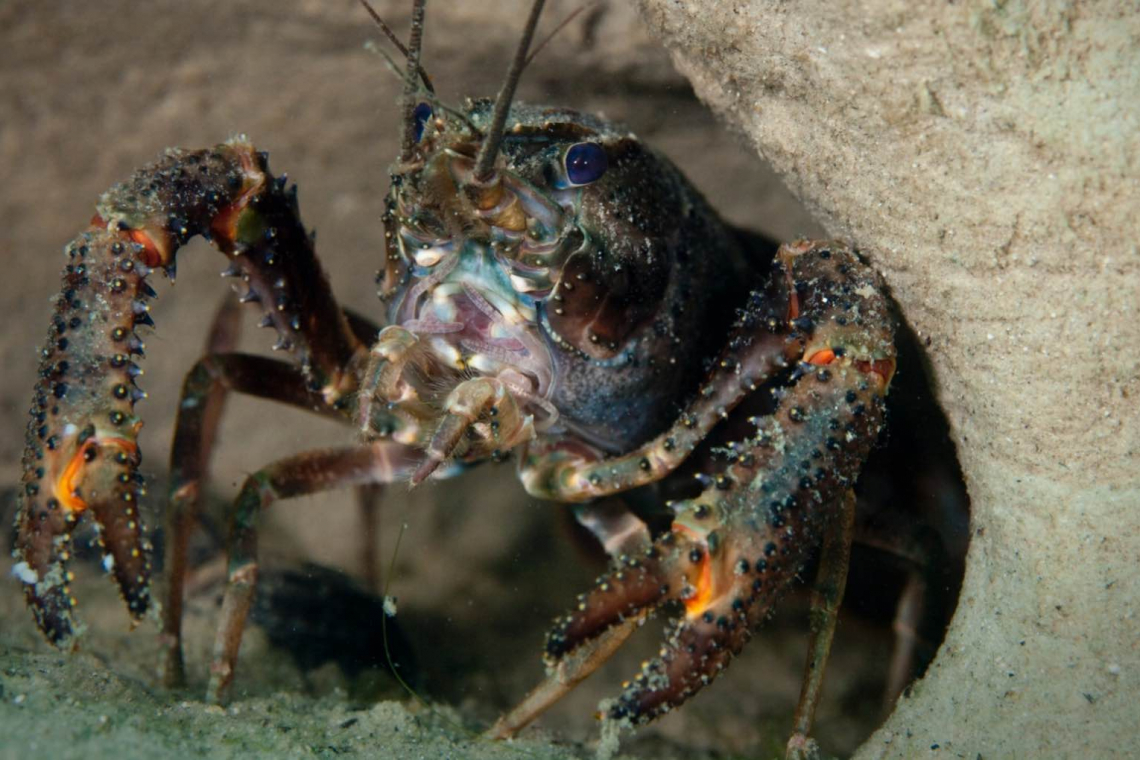 Freshwater crayfish have inhabited New Zealand for millions of years. They have dark, hard, and mottled shells, allowing them to blend in with logs and mud as they seek cover from predators. At night the crustaceans search for food, their strong pincers finding and cutting up fish, mayflies, plants, and snails. They are known here as kōura, a name given to them by the Māori, the Indigenous Polynesian people who first arrived in New Zealand in the 1300s and who now comprise more than 15 percent of the country’s population.

For Māori, the crayfish are economically and culturally significant, both as a delicacy and as part of a traditional value called mahinga kai, which upholds the importance of natural foods, their ecosystems, and the practices of gathering and sustaining them.

Today, kōura populations are on the decline and are considered at risk of becoming threatened due to habitat loss, overfishing, and poor water quality. Makarini Rupene, a mahinga kai expert and cultural land management adviser with the local government of Canterbury, has watched this decline in the country’s South Island. “I was brought up fishing on the rivers, the lakes, the coastline, the ocean,” he said. As a child in the 1970s and ’80s, he learned traditional practices and their relationship with mahinga kai. Now when he returns to the waters of his childhood, he finds few crayfish.

In partnership with the local Māori tribe, researchers from the University of Canterbury embarked on a genetic and genomic study of kōura in 2016. The idea, said Aisling Rayne, the primary author of the study, was to assess the crayfishes’ genetic diversity. Threatened species often live in small, confined populations, where mating among relatives leads to inbreeding. Highly inbred populations are less resilient to environmental stress and changes. Understanding the genetic diversity of local crayfish populations could inform conservation strategies going forward, Rayne said.

Beyond conservation, what makes the study stand out is the inclusion of Indigenous knowledge and practices, and the upholding of the local tribe’s decisions at each research step — from how and where to gather data to how to store and use that data, said sources who spoke with Undark. Billy van Uitregt, a Māori lecturer in environmental studies at Victoria University of Wellington in New Zealand and an evolutionary ecologist, echoed a phrase from the study’s title in summarizing the approach: “looking to the past to navigate the future.”

Since the early 2000s, New Zealand has been incorporating into science a body of knowledge originating from Māori culture, known as mātauranga Māori. This is part of a broader effort by the government to fulfill its promises in the Treaty of Waitangi, an agreement between Māori and British settlers to honor Māori rights. The past two decades have seen more funding and support for research that involves and benefits Māori.

These developments have not been without pushback. Last year, for example, seven researchers at the University of Auckland published a letter arguing that while certain forms of Indigenous knowledge can be helpful, it is not the equivalent of empirical science. Such traditional knowledge “falls far short of what we can define as science itself,” the authors wrote.

The university subsequently distanced itself from the researchers’ views in an email to its staff, but supporters of Indigenous collaborations argue that it's not about knowledge equivalency, but knowledge integration. The kōura study, Uitregt said, was a good example of how the conversation can be repositioned around blending Māori knowledge with modern science.

According to Rayne, the study’s initial goal was to assess the benefits and risks of measuring how well species adapt to their environment. While the study’s funders encouraged the research had to focus on a species of value to Māori, Rayne’s Ph.D. supervisor and one of the study’s co-authors, Tammy Steeves, wanted a different approach in choosing that species. Instead of the researchers’ deciding on the species then engaging with Māori, Rayne “came to the realization that the thing that needed to happen first was to go to the local community.” Through a series of conversations, the tribe confirmed their involvement with the project and identified kōura as a culturally significant species that would benefit from further research.

Sampling kōura for DNA sequencing was a collaborative effort, with members of the local Māori tribe identifying sampling sites and strategies based on cultural protocols, such as consulting the Māori lunar calendar to determine when kōura are active and using fern bundles to collect the samples. Male and female crayfish swim to these bundles — sometimes in reverse gear, briskly flicking their tails to swim backward — and form colonies. These methods proved to be low-cost and effective.

The results of the study indicated low genetic diversity within kōura populations but high genetic diversity between populations. According to Rayne, this means populations were highly inbred but had strong genetic differences between them. Māori narratives helped to shed light on this finding, too. Prior to the arrival of Europeans, the local tribe would move freshwater crayfish from one place to another for various reasons, including to keep stock numbers up. “The stories about kōura and their translocation help us to understand why some populations had unusual patterns of genetic diversity (because kōura were moved by people),” Rayne wrote in an email. These traditional narratives, she continued, “provided context that we could not infer from genomic data alone.”

Translocation is a common conservation strategy even today, as moving threatened or endangered species to new locations, or reintroducing them to areas where they’ve previously been found, may boost their numbers and allow them to thrive. In the case of kōura, additional translocation could be helpful in increasing genetic diversity; the researchers are currently working to develop the best strategies for this.

Genetic and genomic data generated from the study are now stored in a locally managed, password-protected repository that the tribe can access. For Rupene, having this data is helpful for management and conservation of the species. “If the species was to ever become extinct in the future, then we’d have that DNA [and] may be able to reproduce it,” he said.

Van Uitregt would have wanted a deeper dive into the impact of the narratives of moving kōura around. “I wonder if there are any narratives that are missing,” stories that would have influenced the interpretation of the results, he said. While traditional narratives played a significant role in the study, they’re unlikely to have captured all of the tribe’s encounters with crayfish.

Going forward, the integration of Indigenous knowledge into science, supporters argue, could help other researchers correctly interpret their results. Oftentimes, researchers don’t think about the relationship Indigenous people have with a particular organism, “and by not recognizing that, you get the potential to not interpret your results correctly,” said Simon Hills, a Māori senior lecturer in zoology and ecology at Massey University in New Zealand who did not participate in the kōura study but provided feedback on earlier versions of the work. “If we’re not also considering Indigenous touch points,” he said, “we’re going to miss something.”

Combining science with Indigenous knowledge, advocates say, also provides an opportunity for researchers to recognize Indigenous people as partners and collaborators in the research process, as highlighted by a statement issued at the beginning of the kōura study, which thanks the past, present, and future generations of the South Island’s Māori. The statement also includes the names of tribal members who assisted with the study. Rupene is listed as a co-author, which Hills said is uncommon. Typically, he added, Māori might only advise on aspects of mātauranga Māori when “expertise in that knowledge system is just as important as in the sciences, especially when you’re bringing knowledge systems together.”

Incorporating Indigenous knowledge into science could lead to longer research timelines -- another potential hurdle. Rayne and her university colleagues, for example, started building relationships in 2016. She said that the current research and funding system for science “is built on very short funding cycles that don’t support this investment in relationships and the continuation of those relationships over time,” requiring a fundamental transformation to enable careful and long-term work with communities.

“It’s a much longer timeframe because you’re having those conversations with Indigenous knowledge holders,” Hills says, adding that it might take longer, but it could lead to better results and the best, most appropriate impact.

For Rupene, weaving Indigenous knowledge into science is a way of bringing back Māori knowledge and practices that have been lost to colonization. Although New Zealand’s laws used to forbid Māori from practicing their culture, the knowledge and history still exist and continue to be passed down through generations. “We know that the world is in crisis — climate change, global massive development, loss of species and habitat,” Rupene said. “Indigenous knowledge will be the way forward to help protect a lot of our ecosystems for the future.”

Rina Diane Caballar is a freelance technology and science journalist based in New Zealand. Her work has been published in The Boston Globe, The Atlantic, BBC Travel, PRI, and IEEE Spectrum, among other outlets.

This article was originally published on Undark. Read the original article.