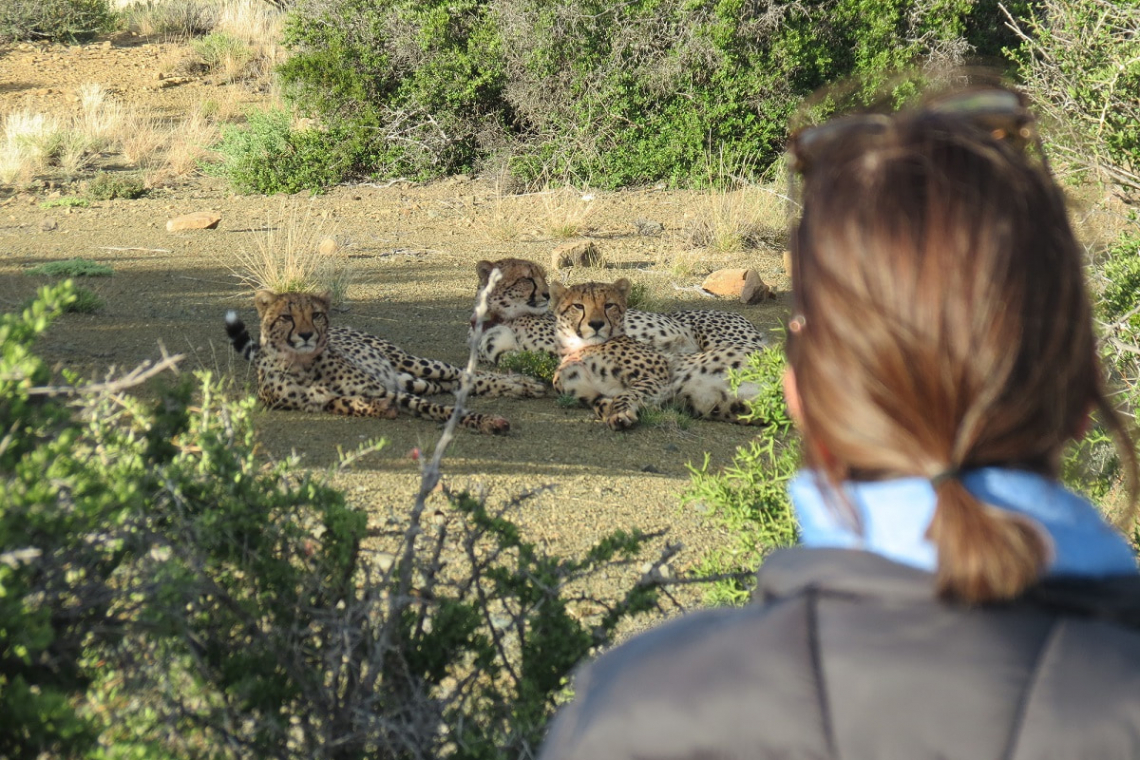 Roam, a private game reserve established in 2016 in the Great Karoo, has become a dynamo of eco-tourism in the region on a farm formerly reserved for hunting. Roam private game reserve sells itself as a destination for “conscious” safaris. The reality is perhaps far more enticing.

Among the most significant differentiators between Roam and similar operations is that visitors are hosted exclusively by masters-level ecologists who, between their duties as field guides and reserve management, remain actively involved in data collection and research. For guests, it represents the opportunity for an out-of-the-ordinary immersion in not only the very mechanics of the Karoo biosphere but its context within the Southern African and indeed, global environment, too.

Despite its youth as a tourism destination, Roam has already notched up numerous claims to fame. With three of South Africa’s 155 registered bird ringers on its staff, it is among very few if not only lodges to offer regular bird ringing excursions to its guests. As an active participant in the Endangered Wildlife Trust’s Cheetah metapopulation project, it was instrumental in producing the Beaufort West/Prince Albert region’s first Cheetah births in over 150 years. And, a study it is currently involved in, seeks to answer questions around the re-wilding of meerkat rescues, which it is undertaking with the support of the University of KwaZulu-Natal.

The remarkable 5 500ha reserve is situated off the N12, in the district of Prince Albert midway between Beaufort West and De Rust. The region that is its home is a vast and arid scrubland, known for sheep and game farms that have long been popular for hunting. 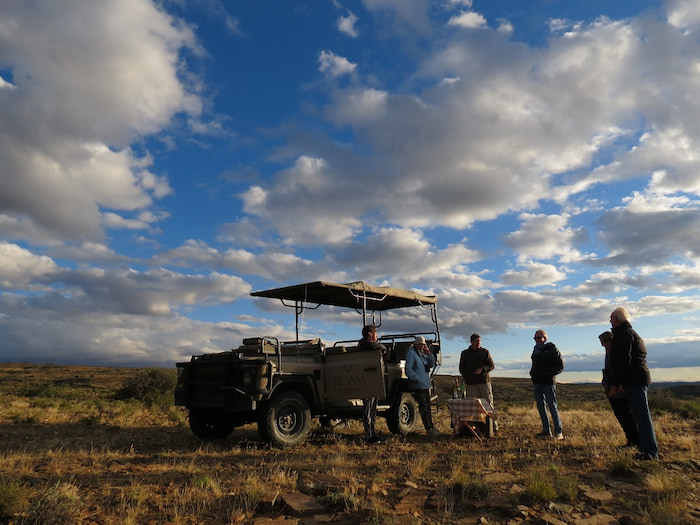 Roam game reserve can truly lay claim to its home in the Great Karoo as being Big Sky Country.

A handful of eco-tourism initiatives exist here too. They include, 70km north of Roam, the Karoo National Park, and 200km south, Gondwana Game Reserve.

In 2016, Denis Post, a Cape-based entrepreneur passionate about hospitality and wildlife conservation, acquired the land. His mission was to re-wild the land, bringing it back to its former biodiverse state and a vision to grow this vast expanse into the Western Cape’s premier wildlife conservation area. It would be pioneering work considering the land now occupied by Roam had previously been a sheep farm and then hunting retreat.

A year later, he appointed Abigail and Donovan de Swardt, each with an MTech in Nature Conservation, to head up operations. The appointment of two more qualified and experienced ecologists followed recently when Bronwyn and Stuart Dunlop joined, fresh from their three-year stint managing conservation projects on the 30ha Cousine Island in Seychelles. The current staff complement is 10.

Making the eco-tourism experience so exceptional is that accommodation doesn’t allow for many more visitors than staff. The main buildings have four standard rooms and one safari suite. The addition of a luxury tented camp, which is only used during summer months, has five platforms that can accommodated 10 people.

Soon after the property was purchased, the transformation began. Some 23km of fencing has been removed to date. The team also set about re-populating the farm with animals endemic to the area and according to the veld’s carrying capacity. In addition to cheetah, giraffe, zebra, multiple species of antelope and black wildebeest, is a herd of buffalo that had previously been kept on the property in a camp system for hunting and now roam free throughout the reserve. As with the meerkats, they too had to undergo a form of re-wilding when fences came down.

“We wanted game representative of original species, but at levels that would allow them to survive droughts,” says Donovan, who is reserve manager. “Before the region was portioned off for farms, animals could roam after food but that’s not possible now.”

Adding diversity to the landscape is 14km of riverine habitat that extends across Roam. 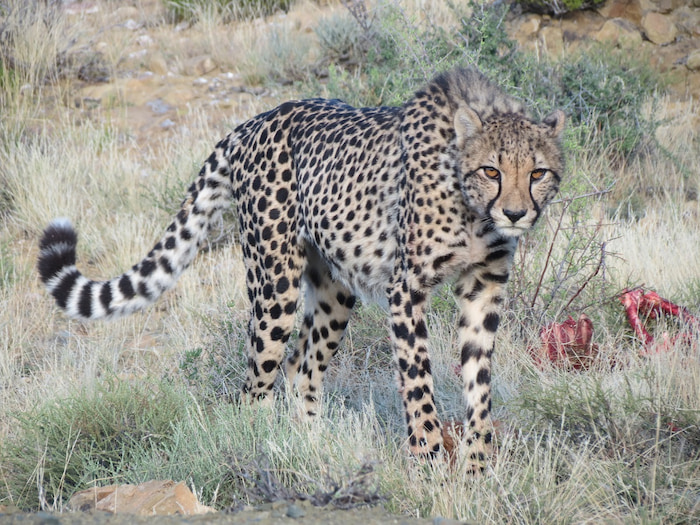 Habituated cheetah at Roam makes walking safaris possible. Springbok on Roam are easy prey for cheetah at the Karoo reserve.

The Return of Cheetah

“The return of cheetah to Roam was a long process,” Donovan explains. “We determined that the reserve could sustain five adults.”

It was during this time that an adult female produced a brood of three cubs to everyone’s great excitement. The last recorded cheetah sighting in the area is dated 1868 when the animal was shot near Beaufort West.

These days, having cheetahs in a reserve such as Roam surrounded by commercial livestock farms requires that the cats wear tracking collars.

They’re also mildly habituated to human presence – a side-effect of their regular monitoring. This allows Roam guides and small groups of visitors to approach them on foot. It is on one of these excursions that Donovan reveals that two of the cubs, now 20 months old, are to be moved to another reserve as part of the EWT programme.

We watch them loll in the shade alongside a recent kill; a springbok they’d taken in the night.

Roam has also supplemented its population of meerkat, helping to re-wild animals confiscated from the pet trade.  A small group was sourced with the assistance  of Solidearth Meerkat Rehab and Rescue with the process of re-wilding getting underway some 10 months ago.

Since then, they’ve also been incorporated into a study with the University of KwaZulu-Natal, which sponsors camera traps around some of the burrows; and, guests are able to observe them closely on regular excursions at dawn. 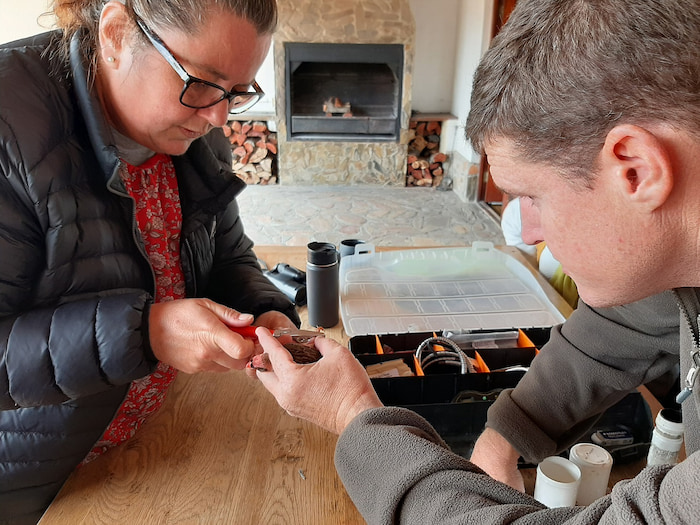 Roam is possibly the only game reserve that offers regular bird ringing as an activity for guests, who are supervised by experienced and registered bird ringers.

One morning ahead of breakfast, Donovan provides a summary of bird ringing history in his trademark storytelling style. Being a son of South Africa’s east coast, he recounts this one with relish.

The technique itself, for the purpose of scientific study, is credited to a Danish schoolteacher who ringed 165 starlings in 1899. The first bird ring recovered in South Africa, however, came from Hungary, where a European White Stork was ringed in 1908 and recovered less than a year later in the KwaZulu-Natal hamlet of Himeville.

Today, of the 155 registered bird ringers in South Africa, about half are professional ornithologists, says Donovan. The remainder are volunteers like him, Stuart, and Bronwyn.

Roam has been ringing birds for four years, feeding all data back to SAFRING, which resides under the University of Cape Town’s Avian Demography Unit.

When guests participate, the typical morning at the reserve involves an introduction and instruction on the basics. Mist nets are then erected at the nearby waterhole.

Over the course of the activity, Donovan talks about the undesired encroachment of pied crows, inadvertently facilitated by infrastructure like roads (a ready source of food via roadkill) and powerlines, masts and telephone poles (ideal for nests) over the past four decades; of the ebb and flow of species all affected by the recent drought – one of the region’s worst in 100 years.

Each bird caught in the net is gently untangled, deposited in a cotton, draw-string bag and brought to the worktable. This morning’s haul delivers amongst others, a Grey-headed sparrow, two Red-billed Queleas, a Laughing dove, a Namaqua dove, a Lark-like bunting and a Fiscal flycatcher.

Each is measured, weighed and inspected, with the data entered into a register along with the unique ring number and name of the guest assisting with the bird. “If we’re notified that one of these rings has been found, I’ll drop you an email,” Donovan says.

As they’re processed, the birds are released. The doves don’t leave immediately, perching for a moment to gaze at their former captors before unfurling their wings and flapping away.

The recapture rate worldwide is just three per cent, so it’s unlikely I’ll be hearing from Donovan anytime soon. Still, the data collected from captured birds at Roam continues to be essential in monitoring the pulse of our environment.